Catfish Fishing On The River

Where I am from all the rivers and little creeks contain catfish.  So I thought I would write a little bit about catching catfish in these types of waters.  Now when I say river I mean a body of water flowing that’s about twenty feet wide, because this is the kind of rivers that we have around where I am from. 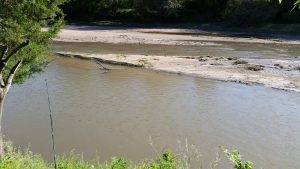 We have some smaller ones and we refer to those as creeks.  But I realize that rivers are something different to everyone.  If you take a look at the Ohio River the Tennessee River or the Mississippi that is certainly not a river that flows through Nebraska.  But nonetheless I am going to talk about the ones that are about twenty foot wide and range in depth anywhere from a foot to about six feet deep at the most.

Fishing for catfish in a rivers and such like this changes the game completely.  It will push the fish into the deeper water they will avoid the shallower water during the day.  Shallower water is the water that ranges anywhere from six inches to a foot.  Sometimes this water is really clear, and fish can get picked up by hawks and eagles so they tend to avoid the shallower water during the day.  You want to look for the pockets of depth.  You also want to look for the slower water. This is where a tree or something has fallen into the river and created a swirl or a pool of some sort to where the water is not flowing as fast as it is in the main channel.  Catfish tend to seek out these locations and hold in them so they don’t have to fight the current as much.  Also, bait constantly flows by them and it is easy pickin’s for a meal.  Once I find these locations, if I am rod and reel fishing, nightcrawlers or chicken livers seem to work well in these locations.

If I am setting lines, it changes a little bit regarding what I use for bait.  (Check your local laws about setting lines on creeks and rivers.  It varies from state to state on what you can and cannot use).  When setting lines I will typically leave them out overnight. I will bait them with some sort of live bait such as minnows, frogs or a small bluegill.  This attracts Flathead catfish who typically like to feed on live bait rather then dead or prepared.  Flatheads are a little more rare in the river where I fish but they run bigger than the channel cats, and if you want to catch them you have to fish for them at night.  When fishing for them at night the bigger fish tend to come out to feed along the banks, so the lines I set will typically be along the banks.

During the daytime favorable success can be had

A good daytime catfish location along the bank

by a fishing rod and reel in the river.  Smaller channel catfish can be caught during the day, usually holding in the slower water areas.  This is a lot of fun for kids because it seems like whenever you go your chances are really good of catching something.  There are not going to be river monsters, but you will catch some fish to take home, and hopefully you and your family will have some fun.