The Numbers Game – It’s All Relative

Ask a group of trappers how many coyotes they caught last year.  Your odds of getting a straight answer aren’t very good.  Not because trappers are dishonest, no that is not what I am implying.  It really depends on the crowd.  If you are in a group of braggarts, young-bucks, and blow-hards, the number will get bigger as you query around the room.  Some guys, however, will shuffle their feet and walk away, or avoid the question altogether.

It’s Not Just Coyotes, Either

This behavior is common among water trappers too.  Beaver guys, mink guys, coon guys and muskrat guys can be this way too.  Fox guys, nutria guys, and fisher guys.  Heck, I even heard a group of guys at an FTA convention bragging on the number of skunks they caught.

If you have been around this game long enough, you have heard such talk as well.  It is human nature to measure our success by the accomplishments of others.  How else would we compare it, right?  Well I am here to tell you that if you want to measure your abilities as a trapper by comparing yourself to others, then you are in for a ride full of heartache and discouragement. 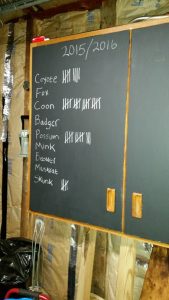 My fur board about December one year. A far cry from the Clint Locklear’s and Mark June’s of the world, yet I was up from the year before, so it was a success!

Let me explain…Take a look at Lesel Reuwsaat, professional fur trapper and lure maker.  He is one of the hardest working guys in the industry.  Then look at guys like me (and you too, probably), guys that have full time jobs and lots of obligations other than trapping.  It’s not realistic to draw a comparison here.  We may get 20 coyotes a year, and he may get 500.

Now this is one extreme to the other, since I am basically a hobby trapper and Lee is a seasoned pro.  Let’s put this in a little better perspective.  A buddy of mine is a farmer and his busy season is typically in the spring and summer.  Once his crops are out of the field (typically before Thanksgiving) He has lots of time to trap through the winter.  He piles up way more fur than me, but does that mean that I should compare my numbers to his?  It would be an unrealistic comparison, one that I probably could never meet.

Don’t talk numbers and don’t compare yourself to others.  It is really trying to compare apples and oranges.  The species and locations are the same, but the time and resources are vastly different, ruining the comparison.

Keep your own personal records.  Comparing your numbers from year to year is the only way to truly measure your personal success.

So next time someone asks how you did this year, talk percentages.  “I was up 10% in coons” or some such answer.  It’s really the only way to make sense of it all.