(You can read the first part, and the second part of this series by clicking the links)

Day 1 started clear, crisp and cold.  As the sun started coming up in the east it was readily apparent

Sunrise at the convention

that I did not pack warm enough clothes to be here.  I made a mental note to get a convention sweatshirt.  Once I got coals started and coffee started in my trusty camping percolator, it was time to get breakfast started.  Nothing beats hot percolated coffee as the sun rises on your campsite.  After cooking up

some farm fresh eggs, ham, and johnnycakes it was time to off head to the convention.

Sights Of A Trapping Convention 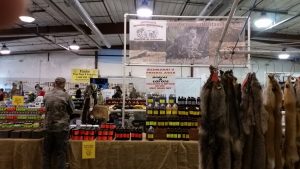 Once I got my dishes done and coffee drank I packed up and headed to the convention building.  Being active in the Nebraska Fur Harvesters Association, I stopped at the booth and caught up with some of my friends who are officers in the association.  After talking a while, I wandered out onto the convention floor to see if there was anything I could not live without, which I’m sure I would find.

I sure did find some things that I needed too.  The first booth I came to was Lee Reuwsaat’s booth.  Lee always has a very organized booth and you can tell he spends a lot of time, and has a lot of pride in his work.  We stock most all of Lee’s stuff in the store, but I needed some of his Private Stock urine he is now selling, so for personal use I ended up with a half gallon each, of coyote and red fox. 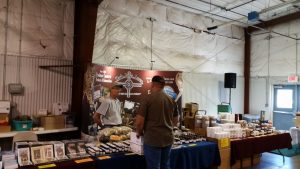 Mark June’s booth at the convention

Another guy I always like to see at the convention is Mark June.  We also stock a lot of Mark’s stuff here in the store, including my favorite lure of his, Fox Frenzy.

I spent quite a bit of time talking to Mark about his Trapping Academy he puts on, and he was just as enthusiastic about it as he always is.  If you don’t own any DVD’s of his, you really owe it to yourself to get one (or all).  Mark is a smart trapper and excellent instructor and you will learn from him.

A Precious Find (For Me Anyway)

There are many people that collect magazines, and Fur Fish and Game is a common one.  So coming across someone selling old copies of FFG is nothing new or rare for that matter. 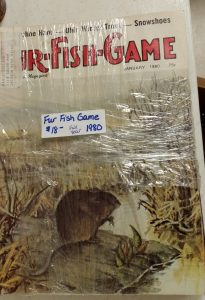 This was around the time that I was beginning to trap.  My brothers and I used to get Fur Fish and Game back then, and we would spend hours pouring over them, reading them from front to back.  Those magazines were wore out, torn, cut up and long gone.  But once I saw this bundle for sale I knew I had to have it, and the $18 I paid for it was a bargain in my eyes.  It was like buying a small piece of my childhood back.

As The Day Moved On, So Did The Good Weather

Friday night was the annual fish fry at the convention.  I like this event, as I get to talk to a lot of like minded people about trapping, hunting, fishing and other things we all love.  Once the wind came up I knew things were changing.  I headed back to camp after my fill of fish and fries, and all the other stuff people brought.  I added some extra tent stakes to the poles and closed up some of the windows, bracing myself for the weather that was rolling in for the night.

…And Roll In It Did…

I awoke to the wind violently beating the flaps of the tent.  The kind of wind that brings the side of the tent down on you and back up again.  I knew I needed to make a break for the truck.  I hate sleeping in my truck, but once I was out of the weather and wind noise it didn’t take long.  I figured I needed to get some sleep because I would have a tent to pick up and piece back together in the morning.