(read the first, second, and third parts of this series)

When light finally started to penetrate the low hanging gray clouds, I noticed a couple things.  First, that my tent was still in one piece, in the same place I set it up in, and that I had a new neighbor.  There was a car parked next to me in the campground.

I got out and was looking for something to get coffee going, and my new neighbor got out of his car and walked over to talk.  He and his family and two dogs had driven all night from eastern Kansas in order to come to the convention.  He knew Lee Stienmeyer and wanted to see him.  I wondered what kind of dedication that takes, to drive all night to a trapping convention?  Then it hit me, that I already knew what it took.  It’s the same dedication a trapper has, when he is out checking traps in the sub zero windchill or damp wet icy cold.  We are a hardy, persistent breed indeed.  I abandoned the idea of campfire breakfast, and headed in to town to see what I could find to eat.

Demos Moved Inside And Rain, Rain and More Rain

Most of the demos on Saturday were moved inside or took place under an awning at the fairgrounds due to the rain, 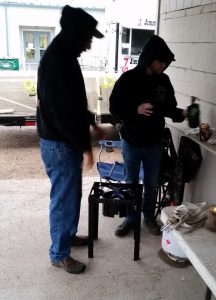 A couple of diehards warming their hands on the “camp fire”

wind and cold.  This wasn’t all bad, as it brings people closer to the presenter and you can sometimes hear better.  The second day of the convention brought more people in, because in part it was a Saturday, and secondly, because there wasn’t much to do outside in the weather.

Allright, who was I fooling, I’m not going to freeze my tail off all night in this tent just to say I did it.  So with that thought in my head, after the noon business meeting of the Nebraska Fur Harvesters Association, I headed out to the interstate and found a room for the last night of the convention.  This turned out to be a good move, as Saturday night brought more windy and cold weather.

Another fun time at the Nebraska Fur Harvesters Association convention is the Saturday night auction. 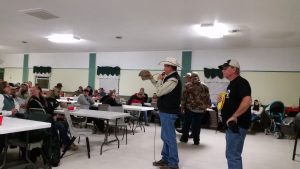 The Saturday auction was a blast, with a very talented auctioneer to make it all the more fun.

A great barbecue meal was served and a fundraising auction was held.  The auction is mostly all donated merchandise, and a lot of it comes from the vendors that are at the convention.  During this auction, I witnessed acts of goodwill that made me proud to call myself a trapper.  Guys would win an auction, then tell the auctioneer “sell it again”.  This basically doubles the proceeds the association receives for that item.  Also, I watched some guys win an item, then turn around and give it to a kid that was present.  The auction also began with the auctioneer stating that he would donate all of his evening’s pay to the youth trapping education program.  Salt of the Earth, these people are, and I left this festivity not only with a new stick burner smoker similar to this one, but also with a feeling of pride that I was part of something bigger than what it looks like on the surface.

That was it for the day.  I headed back to the motel and got a much needed shower and good nights sleep.  Tomorrow would start another adventure home.