I was looking through a box of stuff the other day.  I think it was some of my father in law’s things.  I came across a Zebco 33 fishing reel that was barely (if at all) used.  Now it isn’t one of the collector items, as it still has a lot of plastic on it, but it took me down memory lane.

My Father In Law

My father in law, Richard Brink, grew up in a small town in Nebraska.  An avid outdoorsman, he supplied fish, pheasant, rabbit, duck and quail for the family table.  During the winter, he saved all the fur he trapped to buy Christmas presents for his entire family.  Later in life, stricken with MS, he was forced to let go of many of his old hobbies.  I regret that I never got to walk a hedgerow, flush a bird or run a trap line with him.  To let his Zebco 33 live out it’s remaining days in a shoe box would be nothing short of sacrilege.

Every Tool Has It’s Job

Don’t try and take the Zebco 33 deep sea fishing.  Don’t go down to the spillway at the reservoir and try to catch 50 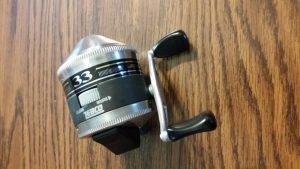 My find. A Zebco 33 belonging to my father in law.

pound monster cats or troll for stripers on Lake Erie with it either.  There are other tools for these jobs.  But this tool has a job.  It’s job is to accompany you to the State Lake and catch bluegill and bass.  To help your 10 year old catch eater catfish at the river, and provide memories that he will cherish forever.  To be an “extra” rod and reel that a friend might need to borrow to go fishing.  To provide a simple mechanism for an inexperienced fisherman who doesn’t know how to use a baitcaster.

I Can’t Wait To Use It

After I check (and possibly replace) the line in this baby, and find a rod for it, I am heading to one of my favorite fishing holes.  Accompanying me will be visions of a much younger me with my brothers holding stringer after stringer of catfish and bullheads caught on Zebco reels.  And the first fish I catch will be hoisted towards the sky…”This one’s for you, Dick” 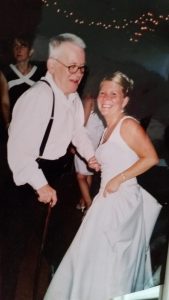 My father in law, Dr. Richard Brink and my wife Shannon on our wedding day, July 2005.